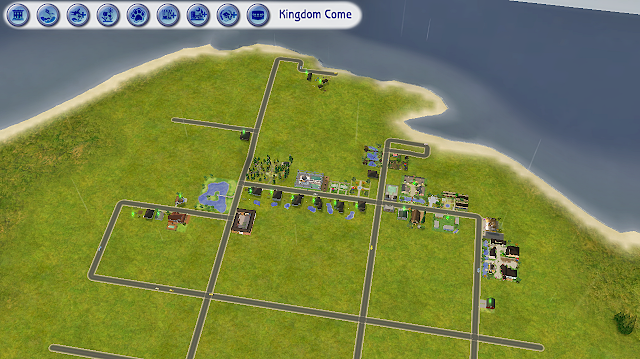 Here is Kingdom Come at the end of 503. The main families are all in a line there with a pond on there lots. I built those houses as well as little apartments. It made more sense for some of my sims to be in a little compound or community rather then have there own homes because there is no way they could afford that or get help from there families, like Rissa for example. Her parents went bankrupt and then died.. When I unlocked architect I said F that and started plopping down pre made houses.

Had a relatively calm season considering. Only 3 people died.. I liked it though. It gave the families a chance to grow or get to know other people. Friendships were forged.
The Bankruptcy thankfully didn't happen to the main families so it wasn't that bad. I would have been hurt if it had hit the Adams or something as they are the richest and there money maker was in jail!!
I did feel really bad for Rissa, she is lucky in love but her parents died. Also RIP my whore house idea.. It is always stopped short. I'm sure there will be another one, one day.
Vyn having a miscarriage was sad but kinda calm considering all the things these families have been through,
I love when I get a 'Crop dies' or 'Lose Status' as those are kinda just free-plays or 'Nothing happens'.
Janel coming into the picture is a game changer honestly. She is gorgeous and evil. She is a lot of fun to write because she is obsessed with Dam. She hates the Faltos, it will be disclosed later why but she does so she wants to ruin there life.
She has three bolts with Ivo and he is her best friend. I was surprised to see that. When I opened the Ivo and Meadow household it showed them being best friends already and I don't know how that happen.
Speaking of Ivo and Meadow, meadow dying by murder was sad. I literally had no idea how to make that work so it is a mystery. It wasn't the raiders though. We will find out who did it in year 504.
And lastly my poor Mazza family. I am so worried about them, they are just getting less and less. They very well might die off. I mean there bloodline will still be there because Pong has many children, they are just scattered everywhere and all have different names.

As far as careers being unlocked this time, only Athletic was unlocked. I mean yay more job options but jesus these families are slow unlocking things, mostly because they are always dying lol.

Anyway,  prepare yourself for year 504 because from what I rolled it isn't pretty for anybody. ♥